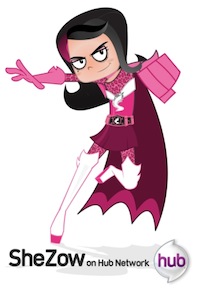 Just when you thought you’d seen it all, along comes an announcement from The Hub, a low-rated cable TV channel that is attempting to increase its audience of children between 2 years old and age 11 by airing a cartoon featuring a boy who gains super powers by wearing a special ring — and dressing as a girl.

Set to debut on Saturday at 12:30 p.m., the gender-bending program stars twelve-year-old Guy Hamdon, “an extreme dude who inherits the power ring of his deceased aunt — the amazing FEMALE superhero SheZow! The ring gives him villain-battling super powers, but was meant to be worn by a girl, and the result is absolutely she-larious!”