Some people are cruel and write very harsh things to celebrities on Twitter. What you don’t see when you send a nasty tweet is that it can cause pain. So to raise awareness, and hopefully make people think twice before they post something awful, we’ve once again assembled a group of famous faces to remind everyone that words hurt. 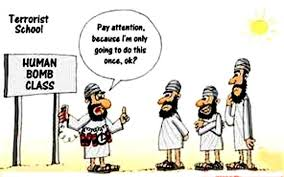 BAGHDAD — If there were such a thing, it would probably be rule No. 1 in the teaching manual for instructors of aspiring suicide bombers: Don’t give lessons with live explosives.

In what represented a cautionary tale for terrorist teachers, and a cause of dark humor for ordinary Iraqis, a commander at a secluded terrorist training camp north of Baghdad unwittingly used a belt packed with explosives while conducting a demonstration early Monday for a group of militants, killing himself and 21 other members of the Islamic State of Iraq and Syria, army and police officials said.

The Democrats, their union supporters, and liberals in general are making a hard and concerted push for an increase in the minimum wage. President Obama mentioned the subject prominently in his State of the Union address on Tuesday night and even promised to take executive action to increase the minimum wage federal contractors must pay their workers starting in 2015. While Republicans and small business owners are sure to resist this push, it is important that everyone on both sides debates the issue with the correct facts. Much of what you hear about the minimum wage is completely untrue.

For this year’s Big Game, Audi has conceived a never-before-seen creature to show the frightening consequences of bringing compromise into the world. The commercial highlights the all-new Audi A3 and celebrates the uncompromised spirit that led to the A3’s unrivaled technology and performance. Watch the spot to see why the most exceptionally-engineered vehicles never come from compromise.

Room for a whole flock of chickens, Terry Crews, a grand piano and the Muppets, but no room for boring. Sing along and see the all-new Toyota Highlander in the roomiest Big Game Ad of all time!

Watch Budweiser’s Super Bowl XLVIII commercial following the special friendship between the Clydesdales and a puppy.

The precision of German engineering makes great cars. Why not great commercials? See what happens when Volkswagen engineers develop an algorithm to create the ultimate Game Day commercial, featuring Carmen Electra, babies, puppies, Wang Chung and more. It’s a surefire recipe for advertising success. Or not.

"The further the spiritual evolution of mankind advances, the more certain it seems to me that the path to genuine religiosity does not lie through the fear of life, and the fear of death, and blind faith, but through striving after rational knowledge."